Splanchnic artery aneurysms are rare vascular lesions with a high risk of rupture regardless of their size. Symptoms may vary from simple abdominal pain or vomiting to morbid conditions like haemorrhagic shock; however, most aneurysms are asymptomatic and difficult to diagnose. In this study, it was aimed to present the case of a 56-year-old female with a ruptured pancreaticoduodenal artery aneurysm treated by coil embolization.

Splanchnic artery aneurysms (SAA) are rare vascular lesions. The first case of SAA was described by Ferguson in 1895 (1), and approximately 3000 cases have been reported since 1960 (2). SAA ruptures are difficult to diagnose and could cause mortality. Accurate and rapid diagnosis is critical in case of rupture. In this study, it was aimed to present a case of ruptured pancreaticoduodenal artery aneurysm (PDAA) treated with coil embolization. Written consent was obtained from the patient.

A 56-year-old female presented to the emergency department with acute abdominal pain, vomiting and nausea. The patient complained of epigastric and left upper quadrant pain. While the patient did not have a history of any surgery, trauma or biliopancreatic disease, she was taking salbutamol 200 µg, valsartan 160 mg and hydrochlorothiazide 25 mg for chronic obstructive pulmonary disease and hypertension, respectively. On examination, the patient’s blood pressure was 155/90 mmHg, heart rate 78 bpm and body temperature 37.2°C. Her abdominal examination did not reveal any signs of rigidity, rebound or pulsatile mass. Complete blood count (CBC) revealed a white blood count (WBC) of 14,550 cells/mm3 (4.600-10.200 cells/mm3 ) and haematocrit level of 32% (40%-54%). Her electrolytes, liver function tests, blood urea nitrogen and creatinine were normal. Plain abdominal X-ray and ultrasonography did not reveal any abnormality. Intravenous contrast-enhanced computed tomography (CT) scan revealed paraduodenal heterogeneity and fluid with an aneurysm that was 18 mm in diameter arising from the pancreaticoduodenal artery (Figure 1).

Figure 1. A-B. Retroperitoneal haematoma (blue arrow) at the level of the 2nd-3rd part of the duodenum and the appearance of the aneurysm originating from the pancreaticoduodenal artery at this level (red arrow).
× 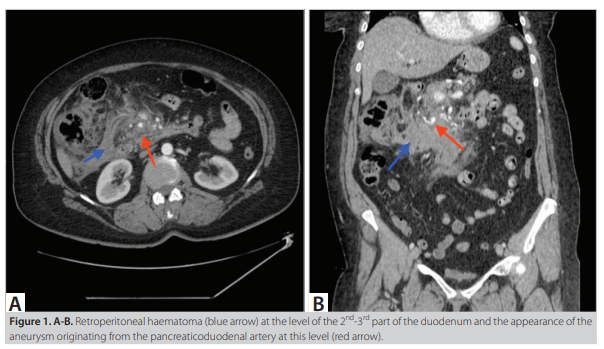 As the patient was haemodynamically stable and the diameter of the aneurysm was <20 mm, surgery was not considered. An urgent selective angiography of the coeliac artery was performed, and an actively bleeding PDAA was demonstrated. Additionally, stenosis of the celiac artery was observed. Aneurysm was selectively catheterised, and embolization of the proximal and distal parts was performed using multiple coils to block inflow and outflow blood flow (Figure 2).

Figure 2. A. Appearance of the aneurysm on digital subtraction angiography (black arrow), B. After coil embolization (blue arrow).
× 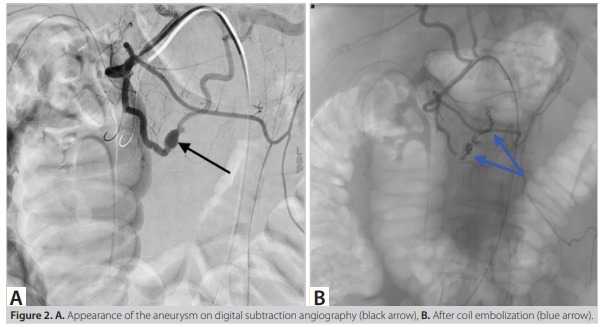 During the period of hospitalisation, her vital signs were normal. In CBC, WBC decreased to 12.300/mm3 and haematocrit was 30% at 12 hours after embolization. On the second day, her WBC returned to normal levels and haematocrit remained stable. She was started on an oral liquid diet on the second day and given a normal salt-free diet on the third day. Her haematocrit level was 32%, and liver function tests, blood urea nitrogen, creatinine and electrolytes were normal on the third day. She was discharged on the fourth day of admission. She returned to our department one month later for follow up CT, which revealed resorption of the retroperitoneal haematoma with no signs of bleeding or aneurysm.

Aneurysms involving all layers of the arterial wall are defined as ‘true aneurysms’, which occur along with the narrowing of occlusive coeliac artery. If the aneurysm is caused by a breach in the inner layer of the arterial wall, it is called a ‘pseudoaneurysm’. Congenital collagen deficiency and atherosclerosis are the most common causes of true aneurysms. False aneurysms may result from pancreatic inflammation, trauma and hepatobiliary vascular surgery (3,4). Our patient did not have a history of any disease or surgery that could cause an aneurysm; however, she had stenosis of the celiac artery.

Clinical presentation of aneurysm varies. Abdominal pain is the most common symptom (52%), followed by gastrointestinal bleeding (24%), hypotension (22%) and pulsatile abdominal mass (6%). Nonspecific symptoms, including vomiting, nausea and diarrhoea are observed in 13% of the patients (2). Our patient had abdominal pain, mild hypotension, nausea and vomiting. Nevertheless, other common symptoms, such as bleeding of the gastrointestinal tract or pulsatile mass, were not seen. Only 26.6% of the patients with SAA are admitted to hospitals with symptoms, and 56.4% of these have ruptured aneurysms (5). Mortality rates are up to 30% in cases of rupture or emergent treatment of SAA (6,7).

Aneurysms can be diagnosed using CT, angiography or magnetic resonance imaging. Widespread use of cross-sectional imaging studies in the past decade has increased the number of patients diagnosed with aneurysm; however, most aneurysms are asymptomatic and are incidentally diagnosed (8). Our patient was diagnosed using a combination of CT and angiography.

Treatment indications for asymptomatic true SAA are aneurysm diameter >2 cm or three times greater than the normal arterial diameter and expansion of >0.5 cm/year, patients undergoing orthotropic liver transplantation, symptomatic patients and childbearing age women. Alternatively, false aneurysms should be treated immediately after diagnosis regardless of their characteristics because of the high risk of rupture. Watch and wait treatment can be used for incidentally diagnosed, non-complicated true aneurysms. False aneurysms have a 76.3% risk of rupture, whereas in true aneurysms, the risk is 3.1% (5). Our patient had a symptomatic aneurysm which was ruptured.

Developments in endovascular treatment methods have revolutionised the treatment of aneurysmal diseases. Difficult surgical approaches lead surgeons to less invasive, non-surgical treatment methods. This report demonstrates that diagnosis of SAA can be difficult and cause considerable mortality if diagnosed late.