Objective: Gallbladder cancer is relatively rare and traditionally regarded as having poor prognosis. There is controversy about the effects of clinicopathological features and different surgical techniques on prognosis. The aim of this study was to investigate the effects of clinicopathological characteristics of the patients with surgically treated gallbladder cancer on long-term survival.

Material and Methods: We retrospectively analyzed the database of gallbladder cancer patients treated at our clinic between January 2003 and March 2021.

Gallbladder cancer (GBC) is relatively rare form of cancer with a worldwide incidence of less than 2/100.000 people (1). Surgical resection is the only treatment with curative potential, and success depends on the biology of the tumor and the completeness of the resection (2). However, there is controversy about the effects of clinicopathological features and different surgical techniques on prognosis. The evaluation of such variables predicted to affect prognosis and long-term survival outcomes may provide valuable data, which can be used to develop effective survival prediction models, allowing individual evaluation beyond standard anatomical staging and possibly affecting treatment algorithms. This single-center retrospective study on GBC patients treated with surgery aimed to determine prognostic factors by evaluating long-term survival outcomes.

We retrospectively analyzed the hospital database for GBC patients treated and followed up in our tertiary referral surgery center between January 2003 and March 2021. Approval for the study was obtained from the institutional ethics committee of the University of Health Sciences Haydarpaşa Numune Training and Research Hospital 2021/65).

Patients who were inoperable at presentation due to unresectable or metastatic disease were referred for supportive care and palliative treatment. Patients who were considered operable at the initial workup were operated on after being prepared for curative surgical treatment. The American Joint Committee on Cancer Staging (AJCC) 8th Edition Manual was used for the patients’ clinical and pathological staging (3). While simple cholecystectomy was considered sufficient for Tis and T1a cases, radical cholecystectomy was required for more advanced cases. While standard radical cholecystectomy was sufficient in most cases for curative R0 resection, some advanced cases required extended resection. Patients were then evaluated in a multidisciplinary manner and referred for postoperative adjuvant treatment when necessary.

Twelve of the 64 operable patients were determined unresectable based on surgical findings and received only palliative surgery or exploration. The other 52 patients underwent resection with curative intent. R0 resection was achieved in 50 patients, but in the other two patients, surgical margin was reported as R1 on final pathology. Among 52 patients, a total of 20 patients received adjuvant therapy (chemotherapy, n= 15; chemoradiotherapy, n= 5). However, due to the diversity of therapy protocols and treatment centers, prognostic effect of adjuvant therapy was not evaluated in this study.

Twenty-nine of the patients in the operable group (45.3%) were incidentally diagnosed during cholecystectomy performed due to cholelithiasis and/or a polyp [incidental GBC (IGBC)]: Five (17.2%) intraoperatively versus 24 (82.8%) during postoperative pathological evaluation. Thirty-five patients (54.7%) undergoing surgery with a preoperative diagnosis of GBC constituted the non-incidental (non-IGBC) group.

The most frequent symptom in the operable group was abdominal pain [n= 58 (90.6%)], 52 (81.3%) had gallbladder stones, and 15 (23.4%) had jaundice at admission. Table 1 and Table 2 show descriptive statistics of serum tumor markers and surgical procedures, and pathological characteristics, respectively.

Table 3 shows cumulative one-, three-, five-, and 10-year survival rates and the overall median and mean life expectancy according to operable or inoperable status, curative or noncurative surgery, IGBC or non-IGBC, absence or presence of jaundice, and AJCC 8th ed. stages. Kaplan-Meier survival curves are shown for IGBC versus non-IGBC (Figure 1) and AJCC stages (Figure 2A-D). 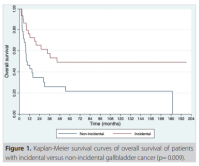 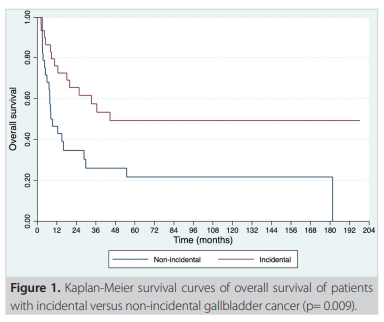 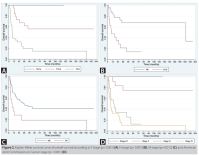 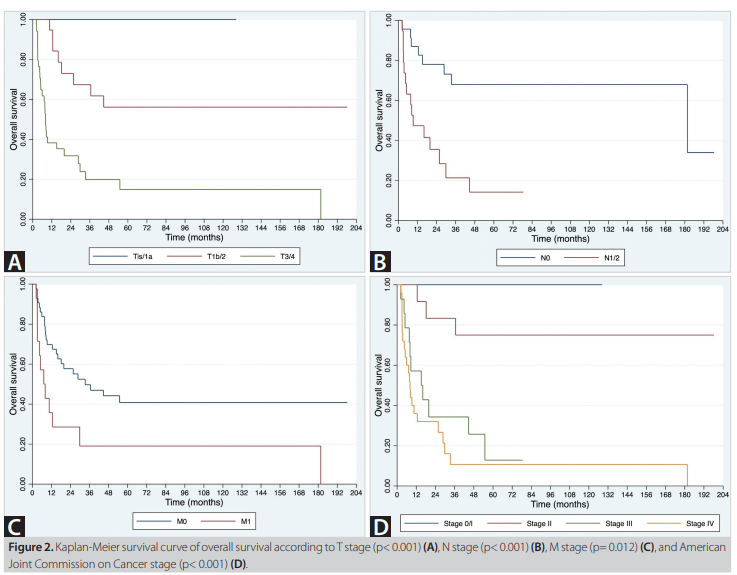 Median survival of the patients on whom we performed curative resection was 36.6 months, and their five-year survival rate was 51.9%; in contrast, in the group that underwent noncurative surgery, median survival was 7.2 months, and no patients survived five years later (p< 0.001). These suggest that curative resection is a prerequisite for the treatment of GBC, as demonstrated in many other series (4-9). Herein, simple cholecystectomy was considered sufficient for curative resection in Tis and T1a cases, while radical resection was performed in T1b and more advanced cases. This practice was consistent with the Guidelines of the National Comprehensive Cancer Network recommendations and the Expert Consensus Statement derived from the Americas Hepato-Pancreato-Biliary Association (AHPBA)/Society for Surgery of the Alimentary Tract (SSAT)/Society of Surgical Oncology (SSO)/American Society of Clinical Oncology (ASCO) Consensus Conference (10,11). When the effects of AJCC stage and the T, N, and M stages on survival were evaluated separately, the negative effect of a high AJCC stage, high T stage, N1 or N2 stage, or M1 stage on survival was demonstrated in the univariate analysis, whereas only a high AJCC stage was an independent factor with a negative effect on survival in the multivariate analysis. These results were consistent with those of previous studies that revealed AJCC stage as the strongest prognostic factor (4-6). In our series, the high number of stage T3-T4, N1-N2, and M1 patients was noteworthy, while 50% of the patients had stage IV disease. Median survival of stage IV patients was 8.1 months, their one-year survival rate was 36%, and their three-, five-, and 10-year survival rates were 10.7%. In the Nagoya series, which is considered one of the main series in the surgical treatment of stage IV patients, median survival has been found as 9.6 months and three-, five-, and 10-year survival rates as 19%, 12%, and 10%, respectively (12). To provide a chance of survival for such advanced GBC cases, surgical treatment may be recommended if R0 resection is possible (13).

An estimated 25-50% of GBC patients present with jaundice. It has been found that the chance of resectability is lower and the incidence of metastatic disease and locally advanced disease is higher in jaundiced patients than in those without jaundice. In addition, when curative resection is performed, morbidity and mortality rates are higher and median survival is lower. As such, some studies have suggested that jaundice is a relative contraindication for resection (2,14). Mishra et al. have demonstrated that jaundice is an independent negative predictor of resectability; however, it is not an independent prognostic factor for post-resection survival (14). In our series, 23.4% of the patients had jaundice, among whom R0 curative resection was achieved in 80%. All patients required extrahepatic bile duct (EHBD) resection, and three patients needed hepatopancreatoduodenectomy (HPD) to achieve R0 resection. Mortality rate for these patients was 16.6%, median survival was 7.6 months. These results are significantly worse than those of the patients without jaundice. While jaundice was a negative prognostic factor in the univariate analyses, it was not an independent factor in the multivariate analysis for this group, which mostly consisted of stage IV patients.

Here, six HPD procedures were performed to achieve R0 curative resection: Two patients died during the postoperative period in the hospital, three died in the first year, and one remained alive at month 64. The cause of mortality was intraabdominal sepsis due to pancreaticojejunal anastomotic leakage. There were an insufficient number of HPD cases for analysis in our series; however, the literature demonstrates mortality rates of 0-60% and five-year survival rates of 0-39.8% were reported after HPD for advanced GBC cases (13).

In our series, another extended radical resection method was major hepatectomy; however, the low number and diversity prevented statistical evaluation. In standard radical cholecystectomy, the most common hepatic resection method was segment IVb/V resection. Although this resection method tended to lead to longer OS than wedge resection, the difference was not statistically significant. Segment IVb/V resection, which was previously recommended considering that potential micrometastases to this region through the venous drainage of the gallbladder by segment IVb/V resection would be also resected, provided no survival advantage over wedge resection; therefore, recommendations of Expert Consensus Statement derived from the AHPBA/SSAT/SSO/ASCO Consensus Conference and version 3 of the Clinical Practice Guidelines for the Management of Biliary Tract Cancers of the Japanese Society of Hepato-Biliary-Pancreatic Surgery have proposed that gallbladder bed resection would be sufficient provided that negative surgical margins are achieved (11,15-17). In 29 (45.3%) of our cases, combined en bloc adjacent organ or structure resections other than HPD were also needed for R0 resection. The most common ones were EHBD resection in 20 cases, duodenal wedge resection in 11, and colon wedge or segmental resection in nine. In the univariate analysis, OS was significantly poor in the group subjected to en bloc adjacent organ or structure resection (p= 0.012). This may have been due to the more aggressive tumor characteristics in the EHBD resection group compared to the non-resected group as reported by Choi et al (18).

Advanced patient age and high tumor grade have been shown to be independent poor prognostic factors reducing OS in the literature (22,23). We also found that being ≥60 years of age and having grade 3 tumor were independent factors that reduced OS. Ouchi et al. have found that LVI and PNI, in addition to high tumor grade, were significantly associated with lower survival (24). Choi et al. have shown that LVI was an independent prognostic factor for OS; however, they did not find the effect of PNI to be significant (18). In our series, LVI significantly shortened OS; however, although such a trend was detected for PNI, it was not significant.

IGBC has a better prognosis overall than does non-IGBC, which may result from its tendency to be detected at earlier stages (5,6). In our series, IGBC cases comprised 45.3% of all cases, and the incidence of advanced T stage, advanced AJCC stage, and LVI was significantly higher in non-IGBC patients. The incidence of jaundice, N stage, M stage, grade 3, and PNI also tended to be higher, but the difference was not statistically significant. In the univariate analysis of survival of patients with non-IGBC and IGBC, non-IGBC was a predictor of poor prognosis and was not an independent factor in the multivariate analysis. Patients with IGBC who were diagnosed intraoperatively and underwent radical resection simultaneously had significantly worse survival than those who were diagnosed postoperatively and underwent radical resection as a secondary operation. These results were similar to those reported by Schauer et al. (5) and He et al (26). He et al. have suggested that this may have been because the postoperative diagnostic group was subjected to a more comprehensive preoperative radiographic evaluation and underwent higher quality surgical procedures (26).

The present study has some limitations. First, it is a retrospective study, which carries an inherent risk of selection bias. Second, it includes data from a single center and a relatively low number of patients, precluding subgroup assessments.

In conclusion, individualized prognostic assessment is necessary in the treatment of GBC. Well-established prognostic factors whose effects have been confirmed along with standard anatomical staging may be of benefit in treatment planning and clinical decision-making.