Objective: The aim of this retrospective study was to review the overall survival (OS) and disease-free survival (DFS) of GISTs treated surgically at our center over the past decade.

Material and Methods: We undertook a 12-year retrospective review of our experience in treating this condition with a focus on long-term outcomes of treated patients in a resource-constrained environment. Incomplete follow-up information continues to be a major problem with studies conducted in low resource settings, and in order to overcome this, we undertook telephonic contact with patients or their relatives to get the necessary information about their clinical status.

Results: Fifty-seven patients with GIST underwent surgical resection during this period of time. The stomach was the most common organ involved in the disease, with 74% of the patients. Surgical resection was the main treatment approach, with R0 resection possible in 88%. Nine percent of the patients were given Imatinib as neoadjuvant treatment and 61% were offered the same, as adjuvant therapy. The duration of adjuvant treatment changed from one year to three years over the study period. Pathological risk assessment categorized the patients as Stage I, 33%; Stage II, 19%; Stage III, 39%; and Stage IV, 9%. Of the 40 patients who were at least three years from surgery, 35 were traceable giving an 87.5%, overall three-year survival. Thirty-one patients (77.5%) were confirmed to be disease-free at three years.

Conclusion: This is the first report of mid-long-term outcomes of the multimodality treatment of GIST from Pakistan. Upfront surgery continues to be the main modality. OS & DFS in resource-poor environments can be similar to those seen in a better-structured healthcare setting.

Gastrointestinal stromal tumors (GISTs), albeit rare, are the most common mesenchymal tumor of the gastrointestinal (GI) tract (1). They account for 1-2% of GI tumors (2) with an incidence of approximately 10-15 per million population per year (3). GISTs originate from the malignant transformation of the interstitial cells of Cajal and c-KIT positive cells of neuroendocrine origin that control gut motility (4). They are most commonly found in the stomach (60%) and proximal portions of the small intestine (30%); however, any portion of the GI tract may be affected. Occasionally, they may originate in extra-gastrointestinal sites such as the omentum, mesentery and peritoneum (2,3,5). GISTs have been categorized into very low, low, intermediate and high-risk tumors, with location, size and mitotic activity acting as predictors of recurrence and metastatic potential (6-8). Eighty to eightyfive percent of GISTs are localized when diagnosed (5,9). While lymph node metastases are rare, intra-abdominal and liver metastasis are not (10).

Gastro-intestinal stromal tumors are generally resistant to the effects of traditional chemo and radio-therapy and till a couple of decades ago, surgical removal was the only treatment option (2,11). Introduction of targeted therapy in the form of Tyrosine kinase inhibitors (TKIs) in the early 2000s revolutionized the treatment options (12-14). TKIs have been shown to increase median progression free survival and overall survival in both adjuvant and neo-adjuvant settings (10,15,16).

We conducted a retrospective study to review overall survival (OS) and disease-free survival (DFS) of GISTs treated surgically at our center over the past decade. We also reviewed the association of OS and DFS with clinic-pathological features of GIST and its management. To the best of our understanding, there has been no publication with long term survival information on surgically treated GISTs from our geographical locale.

This is an ambi-directional cohort study, in which the assessment of exposure status was determined retrospectively from the records, and the outcomes of overall survival (OS) and disease-free survival (DFS) were assessed prospectively. All patients with GIST diagnosed on histopathology and having undergone surgery, from 1st January 2007 to 31st December 2019, were eligible for inclusion.

For overall survival (OS) and disease-free survival (DFS) at three years, patients who were at least three years from surgery, till 31st December 2016, (n= 40) were included. Recurrence and survival data were recorded from clinical records during the follow up period.

In cases of incomplete information, individual patients or close relatives were telephoned using contact details provided on admission to update their current status. After obtaining informed consent, inquiries were made regarding disease status, whether or not the patient was still alive, and if deceased, what the cause of death was. At least three calls were made, at different time intervals, before a patient was labelled “lost to follow-up”.

A total of 57 patients with GIST underwent surgical resection during the study period. There were 34 (60%) males and 23 (40%) females with a median age of 61 years. Thirty-four (60%) patients had associated comorbidities. Majority of the patients, 47 (82%), were admitted electively for surgery. Most patients had clinical symptoms or signs that led to the diagnosis with GI bleeding in 28 (49%), abdominal pain in 23 (40%) and weight loss in 11 (19%) of the patients making up the commonest.

Spindle cell type was the commonest histological variant, seen in 45 (79%) tumors. On immunohistochemical analysis, CD 17 positivity was seen in 48 (84%), CD 34 positivity in 44 (77%) and DOG 1 positivity in 32 (56%) patients. Pathological risk assignment placed 18 (32%) patients in very low to low risk, nine (16%) in intermediate and 28 (49%) patients in high-risk category, whereas, two (3.5%) patients did not have viable tumor in final histopathology because of neo-adjuvant treatment.

Thirty-five patients (61%) received adjuvant treatment following surgery with the same drug. The duration of adjuvant therapy changed overtime from one year in the initial few years to three years at present.

An R0 resection was possible in 50 patients (88%). Mean duration of surgery was 144 minutes. Median length of hospital stay was eight days (7-9 days). Eleven patients (19%) had postoperative complications. There was one 30-day mortality. Early surgical outcomes are presented in Table 3. 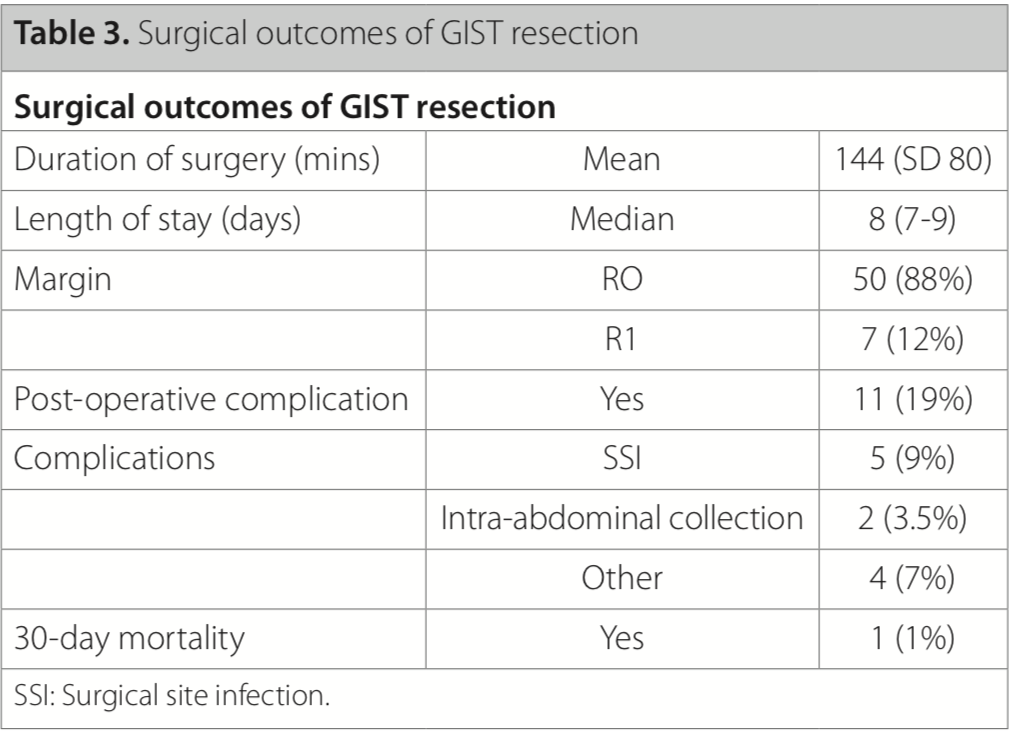 Three-year overall survival was 92%, whereas, three-year DFS was 87% in the study population. On univariate analysis, age, sex, comorbidities, chief complaints, organ involved, risk category, stage at presentation, adjuvant or neo-adjuvant chemotherapy, and negative resection margin were not found to be significant for three-year OS&DFS.

This study aimed to present short and long-term outcomes for surgically treated localized GISTs managed at a single tertiary care center. Reports on clinicopathological features and treatment undertaken have been published before from our geographical area (17-20); to the best of our understanding, this is the first report that presents long term outcomes of treatment by actively tracing patients lost to routine follow up.

We included 57 patients based on our selection criteria over a 12-year period. Median age at presentation was 61 (IQR 53-70) years, which correlates well with international literature (21). A male preponderance (60%) noted in our study was in contrast to international epidemiological review (3), the reasons for which is unclear; however, it could be related to the relatively small sample size of the study group. Stomach was the most commonly involved organ, followed by the small intestine and rectum, and these findings were in concordance with other studies (21,22). In our study, 16% of the tumors were identified incidentally, the rest presenting with clinical symptoms. Gastrointestinal bleeding was the most common symptom followed by pain (19,23,24).

Mean resected tumor size was 8 cm, and the predominant histological subtype was spindle cell type, followed by epithelioid and mixed type. Fifty-six percent of the tumors showed a mitotic rate per 50 high power fields (HPF) of less than 5. Immunohistochemistry showed gene expressions of CD117 and CD34 to be 84% and 77% respectively, these results were consistent with the international literature (19,22,24).

Upfront surgery was the main modality of treatment. Five patients received neo-adjuvant treatment and 35 (61%) received adjuvant therapy with Imatinib. The choice and duration of systemic therapy was variable in our patients ranging from 6-36 months, which was influenced by oncology recommendations and also patients’ ability to tolerate and afford potentially expensive treatment.

Our study showed a three-year OS of 92%. Survival data for treated GISTs has tended to be variable in different studies (10,25,26). Due to the inconsistent biological behavior of these tumors, clinical risk factors like, age, tumor size, mitotic rate, site of tumor, adjuvant treatment, and negative resection margin have been used to develop prognostic models to predict the relative risk of recurrence and metastasis (6,22,26-28). These can be used to identify patients suitable for targeted therapy. Sixty-three percent of our cohort received adjuvant Imatinib treatment. Our study was unable to identify any statistically significant factors affecting OS.

Three-year disease-free survival in our patients was noted to be 87%. A weakness of our follow up methodology was reliance on telephonic interaction for disease recurrence. In developing countries with weak health care infrastructure, quality tertiary medical care is often provided by the private sector and is expensive as a result. In addition, tertiary medical centers are few and far between, it is not unusual for patients with major illness to have to travel long distances for treatment. With medical insurance almost nonexistent, these patients usually have to self-fund the cost of both travel and treatment, a combination that can be financially exhausting. Following successful surgical treatments, patients at times do not have the resources for prolonged follow up and tend to drop out, especially if asymptomatic. With wide availability of mobile phone connectivity, we decided on this approach, considering it better than not having follow up data.

There has been a paradigm shift in the management of GIST in last two decades due to the addition of targeted therapy with tyrosine kinase inhibitors (TKI). In our 12-year study duration, TKI usage was initially in the adjuvant setting but more recently has been used in the neo-adjuvant role as well. Duration of adjuvant treatment has been changing, with initial one-year treatment to three-year at present.

We present the first report of mid and long-term outcomes for the multimodality treatment of gastrointestinal stromal tumors (GIST) from Pakistan. Due to the inadequately developed medical coverage, most patients present with locally advanced tumor. Upfront surgery continues to be the main treatment approach. Availability of TKI in the neoadjuvant and adjuvant setting has increased treatment options. Despite advanced disease and limited resources, our survival outcomes are comparable with other studies. This concludes that overall and disease-free survival in resource-poor environments can be similar to those seen in better structured health care settings.

This study was approved by The Aga Khan University Ethics Review Committee with effect from 22.08.2020.

The authors report no proprietary or commercial interest in any product mentioned or concept discussed in this article.