Treatment conundrums in osteosarcoma of the breast: Case report of two cases from a tertiary care cancer center in India

Extraosseous sarcoma of the breast is an infrequent entity and a harbinger of poor prognosis. Histogenesis of this tumor is uncertain, and it can arise both in denovo and metastatic settings. Morphologically, it is indistinguishable from its skeletal counterpart and clinically, it presents like any other subtype of breast cancer. Tumor recurrence with a propensity for hematogenous rather than lymphatic spread plagues with this malicious disease. Treatment guidelines are mainly extrapolations from those of treatment of other extra-skeletal sarcomas as literature is limited in this context. In this study, it was aimed to present two clinical cases with similar clinical profiles and different treatment outcomes. The intent of this case report is to contribute to the limited database available for management of this rare disease.

Mammary osteosarcoma represents less than 0.1% of all breast tumors and 12% of all breast sarcomas (1). They are subcategorized in the group of mesenchymal tumors as per the World Health Organization classification of tumors of the breast (1). Osteosarcomas of the breast arise primarily in the breast or rarely as metastasis from a primary bone sarcoma. They occur almost exclusively in women with a reported median age of 64.5 years unlike bone sarcomas which occur at a much younger age. Literature search revealed that these cases are infrequently reported as case reports except a detailed retrospective clinicopathologic analysis of 50 cases (2). Diagnostic dilemmas and lack of treatment guidelines surround this rare entity and justify the reporting of these cases.

A 55-year-old female presented to our hospital in her postoperative period in November 2012. She gave a history of lumpectomy of the left breast. She had first noticed the mass two months previously. Her medical and family history was unremarkable. She had been evaluated at an outside oncology facility and had undergone lumpectomy for the breast lump. The histopathological report had given differentials of metaplastic carcinoma versus osteogenic sarcoma. She came to our center for further management. A mammographic re-review revealed a BIRADS IV lesion (Figure 1). Confirmation of the histopathological diagnosis was done performing immunohistochemistry (IHC) with pan-cytokeratin (CK) and epithelial membrane antigen (EMA) on the submitted blocks. Definitive diagnosis of osteosarcoma was made as both these markers failed to be highlighted. The hormone profile and human epidermal growth factor receptor-2 (HER2) testing revealed the disease to be triple negative breast cancer (TNBC). After due discussions with the family and in the multidisciplinary tumor board, it was decided to do a simple mastectomy keeping in view the unclear margin status and also keeping her in close follow up (for six months). Adjuvant therapy was not considered necessary in the presence of adequate local control and the absence of metastatic disease. Interim metastatic evaluations using positron emission tomography and computed tomography (PET-CT) showed her to be well without any tumor recurrence at 52 months. 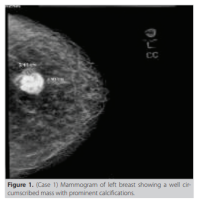 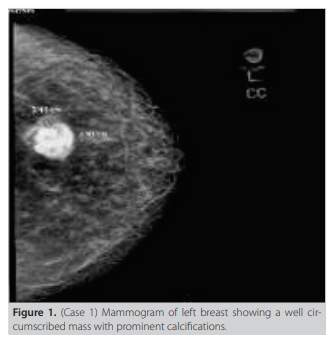 Another 54-year-old diabetic and hypertensive female presented in August 2015 with complaints of lump in the left breast for 1.5 months duration. She had unremarkable family history and gynecologic history. There was no history of radiation exposure, birth control or hormone replacement therapy. On clinical examination, the patient had a hard palpable, 3x2 cm lump in the upper quadrant of left breast with no palpable axillary nodes. Mammography revealed the mass to be a BIRADS IV disease (Figure 2). Fine needle aspiration cytology from the lesion was inconclusive. Ultrasound guided biopsy from the left breast confirmed the lesion to be malignant with suggested differentials of metaplastic carcinoma and osteosarcoma. The patient underwent breast conservative surgery with left axillary nodal dissection. Histopathological examination showed marked proliferation of neoplastic spindle cells with extensive osteoid deposition (Figure 3). Other notable features included high grade nuclear atypia, mitosis and tumor giant cells (Figure 4). Extensive sampling was done for evidence of ductal carcinoma in-situ which was absent and confirmed by ancillary testing with CK and EMA (Figure 5). Hormone receptor and HER2 testing showed the disease to be TNBC. After having explained the nature of the disease and intent of the treatment, she was started on ifosphamide, adriamycin and paclitaxel based chemotherapy (CT). The chemotherapy plan was changed post 2 cycles to ifosphamide and adriamycin due to gastrointestinal intolerance. She completed six cycles of CT in January 2016. Both interim and post treatment PET-CT showed her to be disease free (Figure 6). A follow-up evaluation in February 2017 showed progressive disease in the right lower lobe of the lung (Figure 7). She was further offered metastasectomy and palliative CT with six cycles of ifosphamide and paclitaxel. The patient completed treatment and achieved a complete response in July 2017, following which she is now on a six-monthly follow-up. A telephonic update in March 2018 revealed the patient to be alive with no evidence of disease at eight months. 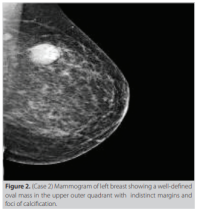 Figure 2. (Case 2) Mammogram of left breast showing a well-defined oval mass in the upper outer quadrant with indistinct margins and foci of calcification.
× 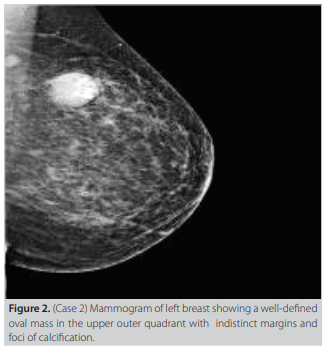 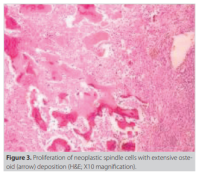 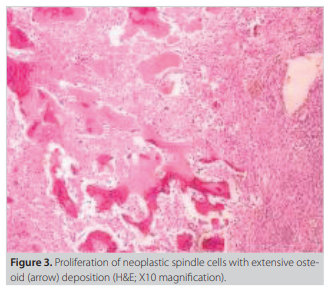 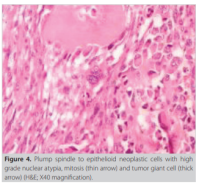 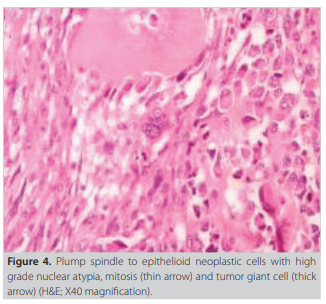 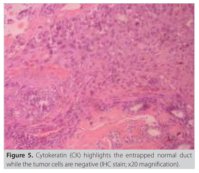 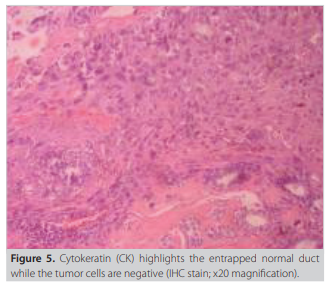 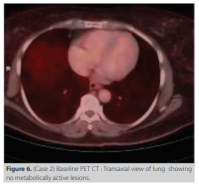 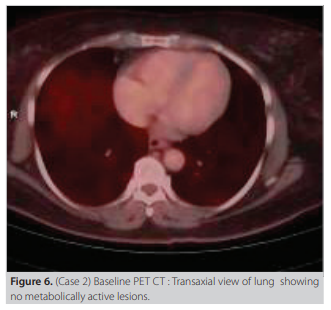 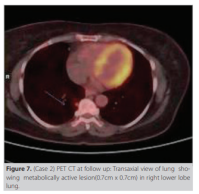 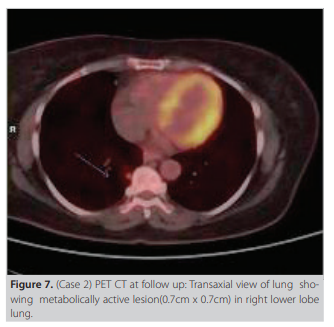 Mammary osteosarcomas are highly aggressive lesions, and uncertainty exists regarding their histogenesis and optimal therapy. Clinical presentation, though not specific for this subtype, presents as a hard palpable mass without axillary lymphadenopathy (3). Though most cases arise denovo, radiation has been elucidated as a possible predisposing factor.

Mammography at diagnosis may or may not show microcalcifications, and a radiological presentation as a well circumscribed lesion can mimic a fibroadenoma (4). Preoperative diagnosis is difficult, and complete histomorphological confirmation after surgical resection remains the mainstay. The most common differential diagnosis includes metaplastic carcinoma, phyllodes tumor with osteosarcomatous differentiation. IHC using CK will help establish epithelial differentiation in the spindle cells, and it would rule out the possibility of primary osteosarcoma (5). Other noteworthy histological findings include spindle to epithelioid neoplastic cells with high grade nuclear atypia, mitosis (Figure 2), tumor giant cells, and extensive osteoid.

Long term prognosis is difficult to ascertain as there is limited literature. The literature shows an overall five-year survival of 38%, with 28% of the patients developing local recurrence and 41% metastasis (2). There is higher propensity for hematogenous dissemination to the lungs, bones and liver (6). Till date, there are no validated treatment guidelines but the best approach documented for localized disease is wide local excision or mastectomy with negative resection margins as margin involvement is a major factor in local recurrence (6). Axillary lymph node removal is optional as these tumors do not spread through lymphatics. It has been observed that specific data on the role of adjuvant chemotherapy and radiotherapy is absent, so extrapolation of treatment data from skeletal osteosarcomas and other extraosseous sarcomas can be done. Polychemotherapy using methotrexate, cisplatin, ifosphamide, adriamycin and paclitaxel have been shown to improve survival in osteosarcoma bone and similar observations have been documented in short reports of osteosarcoma breast. Postoperative radiotherapy is advisable in cases where tumor free margins are not obtained (7,8).

We reported two cases of osteosarcoma breast which, though being matched for age, stage and hormone receptor status, responded very differently to therapy. The patient who received a single modality of treatment i.e. surgery is alive without any evidence of disease at 52 months in contrast to the patient who received a multimodality treatment including surgery, adjuvant therapy and presented with distant metastasis at 12 months. Our cases highlight the treatment conundrums surrounding the treatment of osteosarcoma breast. More research is needed to understand the biology of this disease and explain the arising controversies. Due to its rarity, we have started pooling tissues in our tissue bank to conduct further molecular research.