Gardner’s syndrome (GS) is a very rare autosomal dominant multisystem disease. Osteomas, skin and soft tissue tumors are present with gastrointestinal polyposis. The polyps have very high malignancy potentials. If prophylactic resection is not performed, colorectal cancer development is inevitable in all patients with GS. Polyposis is usually asymptomatic. Therefore, careful evaluation of extraintestinal findings of the disease is very important for early diagnosis. In this article, diagnosis and treatment of GS are presented in monozygotic twins, which have not been previously described in the literature. The diagnostic process, which started with dental complaints of one case, was carried out in an effective manner and then, prophylactic surgery was performed in twins. This article aimed to make clinicians and dentists attentive for early diagnosis of disease and to review treatment options.

Gardner’s Syndrome (GS) is an autosomal dominant disorder considered to be a subtype of familial adenomatous polyposis (FAP). Typically, polyposis coli is accompanied by bone and mesenchymal tissue neoplasms, such as osteomas, lipomas, fibromas and desmoid tumors (1). Colon polyps are frequently asymptomatic and have high potential for malignant transformation. Therefore, early diagnosis and treatment of the disease are very important (2). In clinical practice, skeptical approach to the disease is valued in terms of the prevention of polyposis leading to colorectal cancer by prophylactic surgical procedures and the detection of other gastrointestinal malignancies, bone, soft tissue and thyroid tumors that may accompany this syndrome. In the literature, GS is usually presented as a single case or as few unrelated cases. In this article, it was aimed to draw attention to this rare disease by presenting simultaneous diagnosis and treatment in monozygotic twins. Written consent was obtained from the patients and their families for the use of medical data.

A 16-year-old male patient born as a monozygotic twin. In the panoramic X-ray image of the patient who applied to the dentist with various dental problems, a lesion was seen in the jawbone. He was referred by the dentist to the head and neck surgery department. Maxillofacial computed tomography (CT) examination revealed a sclerotic lesion compatible with osteoma with exophytic, partially lobulated contour, measuring approximately 17 mm in diameter (Figures 1,2). Facial magnetic resonance (MR) examination showed a 17x12 mm sized low-weighted signal with no contrast enhancement in the lateral part of the left mandibular ramus (Figure 3). It was thought that the lesion originated from the left mandibular ramus and had cortex continuity with the left mandibular ramus cortex, and was considered to be compatible with the osteoma. It was learned that the patient had intermittent diarrhea and abdominal pain for about a year. Colonoscopic examination was performed by gastroenterology. A few mucosal polyps with diameter less than 5 mm were detected in the rectum, while approximately 30-35 polyps were found in all of the other colon segments. All segments were pathologically sampled via biopsy and snare polypectomy. Colonic polyps were adenomatous polyps with mild and severe dysplasia, rectal polyps were adenomatous polyps with mild dysplasia. Adenomatous polyposis coli (APC) gene mutation test revealed heterozygous mutant. In systematic examination, a rigid and immobile mass, approximately 2x2 cm in diameter in the left mandible was revealed. A subcutaneous lipomatous mass approximately 2x2 cm in diameter was found in the left lumbar region. There was no disease in family history. The patient’s laboratory parameters, eye examination and thyroid ultrasound (US) were normal. We performed rectosigmoidoscopy and did not see any other polyp in the rectum. Upper gastrointestinal system endoscopy, small bowel passage examination and abdominal MR showed no pathological findings. Total colectomy and ileorectal anastomosis were performed after giving information about treatment options to the patient and his family. The patient was discharged without any problems on the 7th day after the operation. 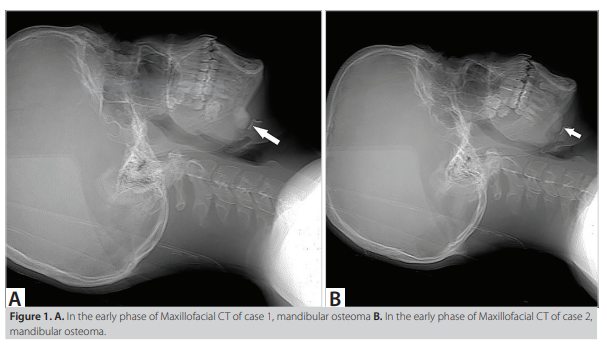 The patient, who is the monozygotic twin brother of first case, did not have any complaints. A panoramic X-ray was taken because of the detection of an osteoma-like lesion in his twin. The findings were similar. Therefore, the twins were examined simultaneously. In maxillofacial CT examination, minimal expansive sclerotic patch lesions were observed in the anterior of both mandibular corpora. In addition, a sclerotic lesion compatible with 15 mm diameter osteoma was observed in the left mandibular ramus (Figures 1,2). Facial MR examination revealed multiple, bilateral sclerotic lesions in the mandible hemispheres. This image was mostly interpreted as osteomas leading to the enlargement of the left mandibulae (Figure 3). Unlike his twin, he had no intestinal or abdominal complaints. Colonoscopy revealed several polyps in the rectum, and about 20-25 polyps in the other colon segments. All segments were pathologically sampled. Rectal polyps were diagnosed as mild dysplastic adenomatous polyps, whereas polyps in other colon segments were adenomatous polyps containing high dysplasia. Adenomatous polyposis coli (APC) gene mutation test revealed heterozygous mutant. On systemic physical examination, a rigid, fixed lesion was found in the left mandibular region about 1.5x2 cm in diameter. Like this, two smaller diameter lesions with the same features were also found in the right mandible. In addition, fibro-lipomatous lesions of approximately 1x1 cm in diameter were detected in the posterior region of the neck and inferior region of the left scapula. The patient’s laboratory parameters, eye examination and thyroid US were normal. We performed rectosigmoidoscopy and did not see any other polyp in the rectum. Upper gastrointestinal system endoscopy, small bowel passage examination and abdominal MR showed no pathological findings. The patient was treated with the same surgical procedure on the same day as his twin. When the lumen of the colon was opened, millimeter-diameter polyps were observed. Both were discharged on the 7th day of surgery. Close follow-up was planned with the attendance of periodic physical examination, rectoscopy, gastroduodenoscopy and radiological imaging. 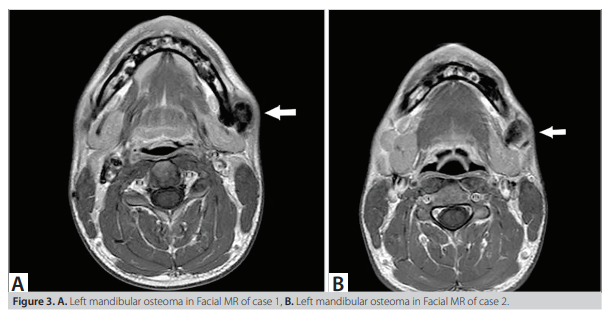 Gardner et al. first identified a link between colonic polyposis characterizing malignant transformation and soft tissue tumors in 1951 and subsequently revealed the autosomal dominant inheritance pattern of the disease (1,3). All patients with GS have colorectal polyposis, while other gastrointestinal system pathologies are less common. Stomach and small bowel polyps can be seen in 12% of the patients and periampullary tumors in 2% (4). Therefore, preoperative upper gastrointestinal system endoscopy and small bowel passage examination were performed. GS affects more than one tissue and organ system. Polyposis usually does not have a specific symptom. Although the disease is usually symptomatic in the second decade, it can be seen anywhere from two months to 70 years (5). It is often the diagnosis of extraintestinal involvement that initiates the diagnostic process of the patients. Common findings are soft tissue and bone tumors and epidermoid cysts. The most common skin finding is epidermoid cysts, which are observed in about 70% of the patients. They are most commonly seen during adolescence and mostly in the head and neck region (6,7). Fibroma, lipoma, leiomyoma and hyperpigmented skin lesions are less common skin and subcutaneous tissue-related lesions (7). In our patients, subcutaneous masses compatible with fibromas and lipomas were also observed. It should also be kept in mind that periampullary carcinoma, thyroid papillary carcinoma, hepatoma, hepatoblastoma, biliary and adrenal neoplasms may also be seen in patients with GS (2). Therefore, we examined our patients by abdominal MR, thyroid USG and endoscopy.

Presence of multiple and bilateral congenital hypertrophy in the retinal pigment epithelium is considered as a marker for the disease (8). These eye findings in GS patients are significantly higher than the normal population although the absence of eye pathology does not prove that the patient is not GS or FAP (8). Eye examinations of our patients were normal.

The rates of dental pathologies vary between 30-75% (5,9). Most teeth and chin pathology can be easily seen on panoramic X-rays. As a matter of fact, in our patient, the diagnosis process was started with dental complaints. CT and MR examinations revealed osteomas in the mandible. Osteomas are seen in almost half of the patients. It is mostly located in the head region and is often affected by mandibles and maxillary bones. It is mostly asymptomatic and pain is not often seen. They usually become symptomatic when they cause asymmetry (5,7,10).

Desmoid tumors are not as common as bone and cutaneous lesions. However, they are the most important cause of morbidity and mortality in patients with GS. These tumors most commonly occur in surgical incisions, abdominal cavity, and retroperitoneum. Although they may be seen at any stage, they often occur within the first three years after colon surgery (11).

Although a 75-year-old woman survives without treatment in the literature, almost all authors report that all untreated patients will develop colorectal cancer before the age of 40 (2,5-7,11,12). Therefore, early diagnosis and prophylactic surgery are very important. Prophylactic resection should be performed before the age of 25, ideally between the ages of 16 and 20 (7). Surgical treatment options include proctocolectomy and permanent terminal ileostomy, restorative proctocolectomy and ileal pachanal anastomosis, total colectomy and ileo-rectal anastomosis. There is no consensus on the surgical procedure to be chosen, but rectal involvement and patient factors must be considered. The first option seems to be the safest approach with no colorectal epithelium remaining, but it is not usually preferred due to the morbidity and low patient comfort caused by permanent ileostomy. Some authors describe restorative proctocolectomy and ileal pouch-anal anastomosis procedure as the best operative choice for GS (2). It provides functional intestinal continuity by protecting the patient from ileostomy but has higher morbidity and mortality. It may also be necessary to add a temporary ileostomy to this procedure. The preference of the patient should be taken into account in this option, especially since urinary complications, sexual complications and infertility rates are higher (13,14). It should also be remembered that after this surgery, life-long proctoscopic follow-up will be necessary due to the possibility of residual mucosa. The third approach, total colectomy and ileorectal anastomosis, is controversial because of the malignancy potential of the remained rectum (2,7). However, some studies have also shown that the incidence of locoregional recurrence is low in selected cases (15). This procedure may be a good option for patients with partially preserved rectum in the adolescent age group, who are aware of the fact that residual rectum will must be kept under follow-up during the life (7,11,14). Patients and families did not accept permanent ileostomy and restorative proctocolectomy because of their mortality and morbidity. The family had a sociocultural level to understand the importance of periodic controls. In our patients, rectal involvement was also limited. For all of these reasons, we performed total colectomy and iliorectal anastomosis.

Due to the correct management of the diagnosis process, which begins with dental complaints in one of the monozygotic twins, two adolescent patients were diagnosed with GS, and prophylactic treatments were performed. This suggests that clinicians and dentists should be cautious and skeptical about the diagnosis of this rare disease, especially in early-stage patients who present with extraintestinal findings.