Intimal angiosarcoma is a rare vascular malignancy, and diagnosis is very difficult due to nonspecific symptoms. There are controversial points regarding the diagnosis, treatment and follow-up of intimal angiosarcomas. The purpose of this case report was to evaluate the diagnosis and treatment process of a patient diagnosed with femoral artery intimal angiosarcoma. Furthermore, in line with previous studies, it was aimed to illuminate controversial points. A 33-year-old male patient, who had been operated on due to ruptured femoral artery aneurysm, was diagnosed with intimal angiosarcoma with the pathology result. Recurrence was observed during clinical follow-up, and the patient was treated with chemotherapy and radiotherapy. Since there was no response to treatment, the patient underwent aggressive surgery including the surrounding tissues. No recurrence or metastasis was observed in the patient’s 10th month follow-up. Although intimal angiosarcoma is rare, it should be considered in differential diagnosis when femoral artery aneurysm is detected. The most important step in treatment is aggressive surgery, but adding chemo-radiotherapy to the treatment should be considered.

Vascular malignancies are observed rarely, and angiosarcoma constitutes less than one percent of them, consisting of two subtypes: intimal type and mural type (1-3). Intimal angiosarcoma originates from the intimal layer of the arterial wall. It can develop at any level of the aorta and manifests different symptoms depending on its levels. Symptoms usually emerge as a result of stenosis, obstruction or thromboembolic events (3-5). It is difficult to diagnose intimal angiosarcoma due to nonspecific clinical presentation. In addition, intimal sarcoma diagnosed with femoral artery aneurysm is a very rare case. Surgery with negative tumour margins is a cornerstone of the intimal angiosarcoma treatment (6-7). It becomes apparent that chemotherapy and radiotherapy play a role in sarcoma treatment, but less attention has been paid to specific angiosarcoma treatment (8-13).

This case report attempted to shed light on how an intimal angiosarcoma case should be handled and addressed a number of dilemmas regarding diagnosis, treatment options and follow-up methods.

A 33-year-old male presented with a complaint of swelling and pain in the right groin for a month. His medical history and family history were not remarkable. On physical examination, the pulses of bilateral lower extremities were palpable, and the ankle arm pressure index was measured as 1.2 on the right and 1.3 on the left. Arterial Doppler ultrasound and Computed Tomography (CT) imaging revealed a ruptured right femoral artery aneurysm that was located 5.5 x 4.5 cm periphery of the right main femoral artery and was measured 7 mm at its thickest site (Figure 1). 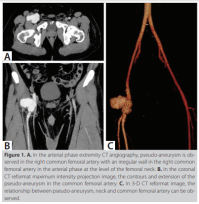 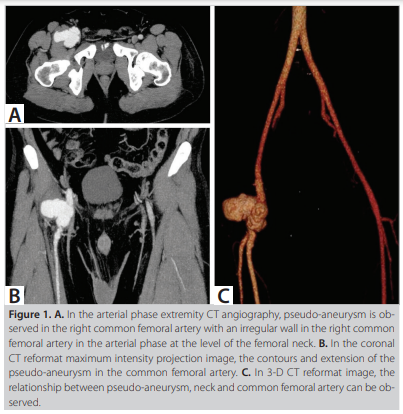 The abdominal aorta, main iliac and external iliac arteries were detected normal. The patient was investigated for systemic autoimmune diseases and vasculitis, and no remarkable result was obtained. In addition, the patient had no history of trauma.

The patient underwent aneurysmectomy, and common femoral artery reconstruction was performed with a synthetic ringed polytetrafluoroethylene (PTFE) graft by preserving the external iliac and deep femoral arteries. After the operation, distal pulses of the patient were palpable and the ankle arm pressure index was measured as 1.2 on the right. Pathological examination of the specimen revealed pleomorphic-undifferentiated sarcoma originating from the intima with Vimentin (+) and a margin greater than 1 cm (Figure 2). Thoracic CT and Positron Emission Tomography (PET) showed no distant metastasis. The patient was evaluated by the oncology unit after the surgery, and clinical follow-up was decided due to tumour free margin and no metastasis. In the third month of follow-up, the patient complained about swelling and pain in the right groin. Femoral artery pulses could not be measured on the right lower extremity. Magnetic Resonance Imaging (MRI) and PET imaging showed a relapse of sarcoma that was measured as 9 x 7 cm. Recurrent sarcoma was found to extend the iliac muscle at the level of the right iliac crest and encircled the deep and superficial femoral arteries 360 degrees. In addition, a 37 x 27 mm metastatic lesion at the level of the collum femoris and trochanter minor was detected (Figure 3). Chemo-radiotherapy was decided in order to perform surgical resection with a wider tumour negative margin. 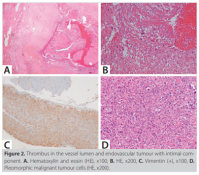 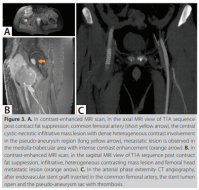 Two cycles of chemotherapy at three-week intervals (150 mg Adriablastin + 6000 mg ifosfamide plus + 3000 mg mesna) and 28 Gy/8 fr radiotherapy were administered to the patient. During chemo-radiotherapy, deep vein thrombosis developed within the right femoral vein and subcutaneous enoxaparin sodium 2 x 8000 IU was initiated at the treatment dose. Surgery was decided since the MRI revealed no regression in the relapse lesion and metastatic lesions after chemotherapy, and surgical resection was considered possible in preoperative evaluation. Eight months after the first operation, the skin including the previous incision line, subcutaneous tissue, proximal femur and neighbouring muscles, external iliac artery and vein, and superficial femoral artery and vein were removed en bloc, and then vein ligation was performed (Figure 4). A femur prosthesis was placed for reconstruction and by-pass was performed with a synthetic ringed PTFE graft at the level of bifurcation between the main iliac artery proximally and superficial femoral artery distally. The femoral vein and main iliac vein were ligated (Figure 5). Plastic and reconstructive surgery was also included in the reconstruction part of the operation. A vertical pedicular rectus abdominis flap was removed to rideand left side of the deep inferior epigastric artery. The flag was transposed to the oncologic resection area. The flap of the left rectus abdominal muscle, skin and subcutaneous tissue, anterior region of the femoral prosthesis and the resection region were closed primarily (Figure 6). 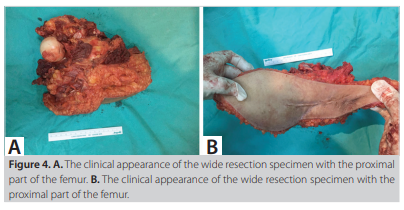 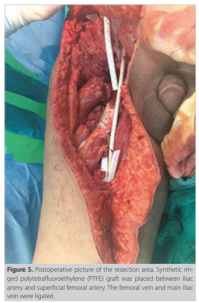 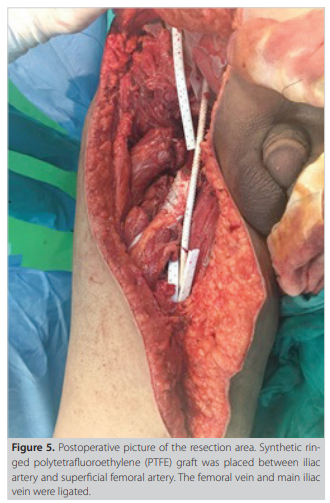 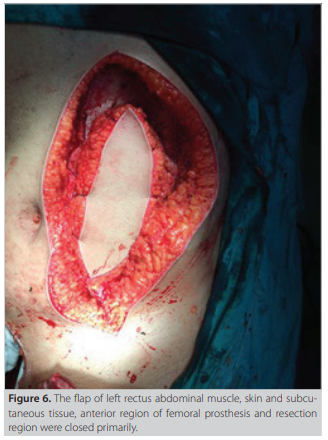 Postoperatively, all pulses of the right lower extremity were palpable, and the ankle arm pressure index was measured as 1. In postoperative follow-up, flap circulation was good. Postoperatively, oral acetylsalicylic acid 100 mg, subcutaneous enoxaparin sodium 4000 IU and intermittent pneumatic compression on bilateral lower extremities were initiated for DVT prophylaxis. Pathological examination reported an undifferentiated high grad sarcoma with 85% necrosis and negative surgical margins in vascular, soft tissue, bone tissue structures. The patient was discharged on postoperative day 10 with oral acetylsalicylic acid 100 mg/day. On control, distal pulses of the right lower extremity were palpable and ankle arm pressure index was 1.1. Two months after the second operation, the patient received paclitaxel 150 mg/week treatment for 12 weeks. No local relapse and distant metastasis were detected in the follow up control visit performed in the tenth month.

Intimal sarcomas are quite rare undifferentiated pleomorphic sarcomas originating from the tunica intima (1-3). According to the results of a review by Sebenik et al., 90% of intimal sarcomas originate from the aorta and 10% of them originate from the iliac and femoral arteries (4). Clinical findings vary depending on the level of the affected vessel, whether there is stenosis in the aortic lumen or not, or whether thromboembolic metastasis developed or not. Intimal sarcomas form polypoid masses growing toward the lumen, which causes more commonly obstruction or thrombo-emboli symptoms (1-5). Diagnosis of intimal angiosarcoma is difficult due to non-specific clinic presentation and extreme rarity. Aortic angiosarcoma presents as an asymptomatic thoracic aneurysm, dyspnea, sudden death or distal embolization. However, the case of intimal sarcoma diagnosed with femoral artery aneurysm and/or arterial rupture is very rare in the literature. The present case was admitted to our clinic with non-specific complaints and was primarily investigated for vasculitis. Diagnostic approach for intimal angiosarcoma is based on a high degree of suspicion. An alternative explanation is that in the differential diagnosis of an aneurysm, which is not associated with vasculitis and traumatic status, intimal sarcomas should be considered.

While planning the treatment of intimal sarcoma, MRI is important for the assessment of local invasion and determining resectability whereas intravenous contrast CT is important in assessing distant metastasis. There are insufficient data on the use of PET scans in this type of tumour (5,6,13). Although there is no defined algorithm for the treatment of intimal sarcoma, aggressive surgical resection including neighbouring tissues is recommended in non-metastatic cases. Obtaining negative surgical margin is the most important factor for the prevention of relapse, which is fostered by some local recurrence studies (6,7). From this point of view, it appears that frozen section (FS) examination is also recommended for the assessment of resection intra-operatively. In the first operation, FS was not performed because it was not evaluated as intimal sarcoma. Diagnosis of intimal sarcoma was made after surgery, and no additional surgical intervention was considered since the surgical margin was greater than 1 cm. In a study conducted by Alamanda et al., positive surgical margin has been shown to increase relapse rates by 12-38% over a six-year follow-up (7). Re-resection should be performed, if possible, in patients with surgical margin positivity. Administration of radiotherapy is recommended if re-resection is not possible (8,9).

The efficacy of radiotherapy and chemotherapy in case of intimal sarcomas is contradictory. However, there are studies indicating that chemotherapy and radiotherapy administered after surgery have positive effects on survival (10,11). In addition, recent literature on extremity soft tissue sarcoma stresses that preoperative chemo-radiation improved overall survival and disease-free survival, but it is not a standard treatment (10). Beane JD et al. have shown that postoperative RT improves local control in high-grade lesions such as intimal sarcoma tumours, but its effect on overall survival has not been demonstrated (12). On the other hand, previous research has mostly tended to focus on soft tissue sarcoma rather than on intimal angiosarcoma. In our case, it was decided to continue with adjuvant chemotherapy and radiotherapy after early recurrence, but a satisfactory response could not be obtained. Therefore, en bloc resection including bone, soft tissue and vessels was performed.

There is limited data available in the literature on surveillance strategies for intimal angiosarcoma. There is no exact data about which imaging method is better for follow-up. During the first-year follow-up, MRI for local recurrence and CT for distant metastasis may be preferred every four to six months. In this case, no evidence of relapse was found in the 10-month follow-up period.

We presented a rare femoral angiosarcoma case, which was treated with chemo-radiotherapy and was operated aggressively to achieve tumour negative margins. When femoral artery aneurysm is detected in patients with non-specific symptoms, intimal sarcoma should be considered in differential diagnosis. The most important step in treatment is aggressive surgery, but adding chemo-radiotherapy to the treatment should be considered.