Invagination of the appendix due to endometriosis presenting as acute appendicitis

Appendicitis and endometriosis are commonly encountered surgical problems. Endometrial involvement of the appendix is rare and very few cases have been reported in the literature. True diagnosis of appendix invagination is highly difficult due to variable symptoms. Noting the findings which are in favour of invagination in patients diagnosed with acute appendicitis is of great significance in order to be prepared for changing surgical attempts. This case describes a 34 year old female patient diagnosed with infertility who was operated on for acute appendicitis. In the pathological assessment, endometrial involvement of the appendix was seen. The classification, symptoms, radiological appearance and treatment of appendix invagination described in the literature are discussed.

Invagination of the appendix is a rare condition and only a few cases have been reported in the literature.

The simultaneous presentation of appendix invagination and endometriosis is even rarer, and a few cases have been reported in the literature so far. In a study by Collins (1), the incidence of invagination was reported as 0.01% in 71000 appendix specimens.

A 34-year-old female patient was evaluated for abdominal pain for the last 2 days. Her past medical history revealed infertility for 2.5 years with no known etiology. Her gynecological examination was normal. The laboratory results revealed a leukocyte count of 8500 and a CRP level of 5.57 mg/L. On ultrasound, a non-compressible bowel segment that was 4 cm in length and 13 mm in diameter was observed at the right lower quadrant. The patient underwent appendectomy through a Rockey-Davis incision with a diagnosis of acute appendicitis (Figure 1a, b). An informed consent was obtained from the patient, and after the pathologic evaluation another verbal consent was obtained for publication of this manuscript.

Figure 1. View of the invaginated appendix after appendectomy
× 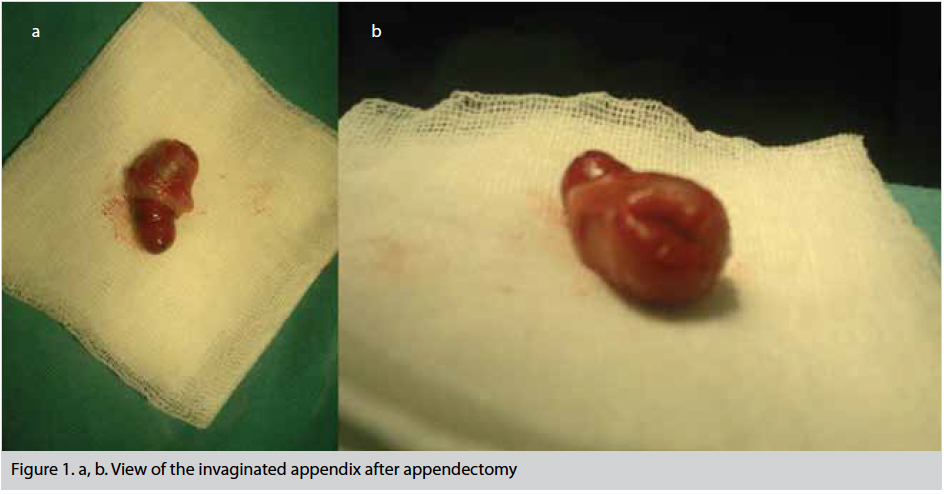 Appendectomy is one of the most common emergent surgical procedures. Addiss et al. (2) estimated the lifetime risk of appendicitis to be approximately 8.6%. Invagination is a rare pathology that requires appendectomy. Appendix invagination mimics acute appendicitis, and presents with intermittent symptoms. Currently, it is being more frequently diagnosed due to the improvements in imaging methods.

Appedix invagination is more common in adults (76%) than in children (24%). Female patients (72%) are affected twice more than males (28%). The age on diagnosis ranges between 5 months to 85 years, and the mean age in pediatric population is 7 years, whereas it is 46 years in adult patients.

The most common pathologic finding in the evaluation of 151 appendix specimens with appendix invagination was the presence of inflammatory changes (29%). In pediatric cases, the inflammation rate was reported as 76%. However, in adult patients with appendix invagination, inflammatory changes were detected in only 19%. In adults, endometriosis was the most common reason, with a rate of 33%. The rates of mucocele, adenoma, carcinoid and adenocarcinoma were reported as 19%, 11%, 7% and 6%, respectively. Other rare causes detected on pathological evaluation were papilloma, hamartoma, mucosa associated lymphoid tissue, lymphoma, juvenile polyposis, Crohn’s disease and melanosis coli (4, 5).

Endometriosis is the presence of endometrial tissue outside the endometrial cavity. Its incidence is between 8-15% in premenopausal woman. The disease can classically be found within the pelvic organs and pelvic peritoneum, inguinal canal, bowels, urinary bladder, heart and lungs. The etiology of the disease is unknown. There are two main theories for its pathogenesis. The transportation theory defines the transfer of endometrial cells to distant sites by any surgical manipulation during the menstrual phase. The other theory is the metaplastic theory (6, 7). The most common symptoms are dysmenorrhoea, pelvic pain and infertility. Nevertheless, patients may remain asymptomatic.

McKidd has reported appendix invagination for the first time in 1858 (5). Since this first report, reports on appendix invagination have been limited to case reports or small case series. Forshall (8), Bachman and Clement (9) have reported the largest series, including seven cases. Determining the incidence, demographics and characteristics of appendix invagination is almost impossible due to its rarity. Chaar et al. (3) have reviewed the literature, and identified 190 reported cases.

Mc Swain described five types of invagination:
Type I: Invagination at the tip of the appendix, the invagination is into the proximal appendix.

Type V: Complete inversion of the appendix into the cecum by progression of types 1, 2 and 3.

In some situations, invagination extends into the entire colon and anus. Dunavant and Wilson (10) have presented a case where an appendix that contained a mass lesion protruded from the anus and caused a complete colonic obstruction.

Ultrasonography is effective especially in the diagnosis of pediatric cases. Appendix invagination diagnosis is possible by the utilization of three-dimensional detectors in computed tomography. Radiology can be an alternative for endoscopy.

The regression of invagination and symptoms after barium enema has been previously reported. However, the recurrence risk is high and most surgeons advocate resection.

Besides open appendectomy, laparoscopic appendectomy may also be used for the treatment of appendix invagination. Other techniques used for treatment include ileocecectomy (27%), right hemicolectomy (21%) and subtotal colectomy (1%). Invagination has been treated colonoscopically in four adult patients (3%). This technique seems to be effective and safe, if the endoscopist identifies appendix invagination.

Appendix invagination is a disease with many different variants, which general surgeons should be aware of. Its treatment ranges from right hemicolectomy and appendix reduction to basic appendectomy, according to the lesion type. A medical history of endometriosis or polyposis should be alarming signs for invagination of the appendix.